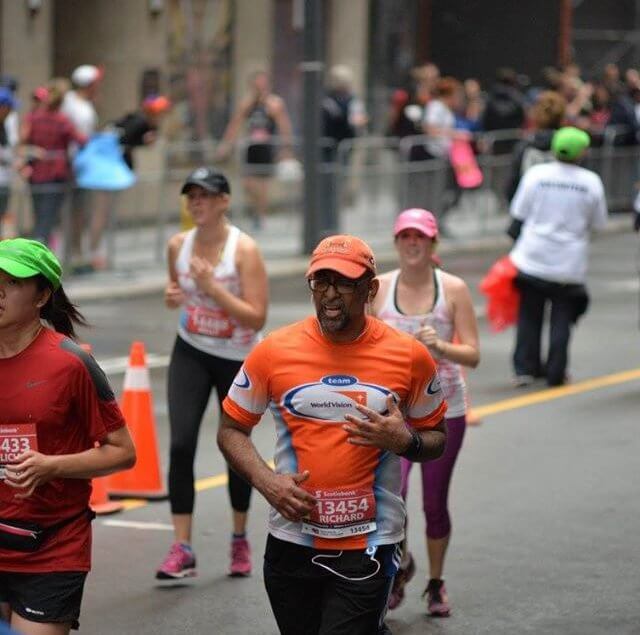 Therefore I run thus: not with uncertainty. Thus I fight: not as one who beats the air (1Co.9:26).

Encouraged by my completion of the 5k run and feeling better by the day I decided to go to the next level in my running career – the 10k run. Truth is I became somewhat obsessed with this running thing after I realised that 20 years of pain in my left knee had completely disappeared without any medication since I started training for the 5k. So I bought books on running and read everything there is on the Internet on preparing for a 10k. I made a note of expected completion time for my age group and began to track my progress after each run. I geared up with water bottles, treated myself to more elite running shorts and tops and shoes, and began my training around our neighbourhood. I ran my first 10k alone, the Valeant Pharmaceuticals on May 4, 2013 and came in under an hour and so I wanted to go for the marathon but I also wanted to encourage my daughter to run with me and so I settled for a more doable 10k. She managed to lure a good friend to run with us. How did I pull this off? Simple! I paid their registration fee and told them they were doing it for my health (he he).

It was a beautiful spring day. May 7, 2017. The skies were truly blue with wisps of cloud here and there, the temperature was just right, and the wind was down. I felt good and so did my daughter. But her friend was nervous. He was lithe and very athletic but he never ran anything above a kilometre before because he never had reason to and he did very minimal training leading up to race day. As my daughter and I chatted and enjoyed the camaraderie at the starting line, her friend kept running up and down the adjacent hill, all the way to the countdown for the race. Looking at him reminded me of the fellow who practised for the hot dog eating contest by eating 50 dog-filled buns just minutes before the competition. “I can do it!” he shouted with glee. We worried that my daughter’s friend had already run his quota up those hills.

Five minutes to start time. Judging from where the colour codes and pace bunny had us we were going to be among the average finishers. That’s cool! The gun went off and we were so far back of the group that when we eventually stepped over the starting line I whispered to my daughter that the front runners were probably already collecting their medals.

Immediately upon hitting the cable under the starting line our friend broke ranks and within a minute he disappeared from view. My daughter chuckled and said not to bother we will find him hobbled up somewhere along the route. My daughter and I ran in sync, leisurely, checking with each other along the way to see how the other was doing. The race was uneventful, just like it should be on such a gorgeous day, and we finished in a respectable 58 minutes. My daughter would get boasting rights, taking me by less than a second even though we held hands and ran to the finishing line.

Our friend was nowhere to be seen and his absence at the finishing line where people waited for friends and loved ones made us fear that he might be stranded along the route. With our finishing medals proudly dangling from our necks we grabbed a hot chocolate and began the search for our friend. Where was he? I decided to check the list of finishers and there was his name, 45th finisher out of 986 competitors, with a time of 43 minutes. He beat us by 15 minutes on his very first run after running for half an hour up and down hills. When we finally found him he seemed very relaxed and when I told him about his amazing result his response was simply, “Well, people were in my way and I just wanted to get past them.” That’s one way to go about racing, I thought. It reminds me of the old lady who was stopped by the highway patrol for speeding. Looking bewildered at the nervous 80-year old woman the police asked her if she was aware of how fast she was going. “Yes, officer, I know and I have a reason. I just want to get off this darn highway as fast as possible. Is that a crime?”